Brewskey posts and new feature updates, bug fixes, or general updates on our Facebook page. This blog needs a lot of love but until I can “post once and update in multiple places” that’s not going to happen.

While we highly recommend using the Titan 300 Flow Sensors with your Brewskey box, we know that it might be a bit pricy for some budgets.  We want to make Brewskey as accessible as we can so we have put together a short shopping list and instructions on how to set things up.

If you start with this basic set of parts, you can add new taps to your setup for less than $10 a tap. Putting everything together isn’t complicated and doesn’t require technical savvy.

**Update** We did a bit more digging and found a new flow sensor that is made with a material that should be food safe. We ordered a few of these to test ourselves!

Here’s the original setup we posted about for a single tap setup. We’ve validated and tested that this will work with Brewskey but recommend going with the new sensor we found:

* We recommend you also use some Thread Sealing Tape when connecting the barb hose. This will help prevent leaks.

The hardest (easy) part of this will be wiring the flow sensor to the RJ45 Ethernet Connector Breakout Board.  If you follow the following wiring guide, you should be fine:

In this case, you wire the flow sensor as follows: 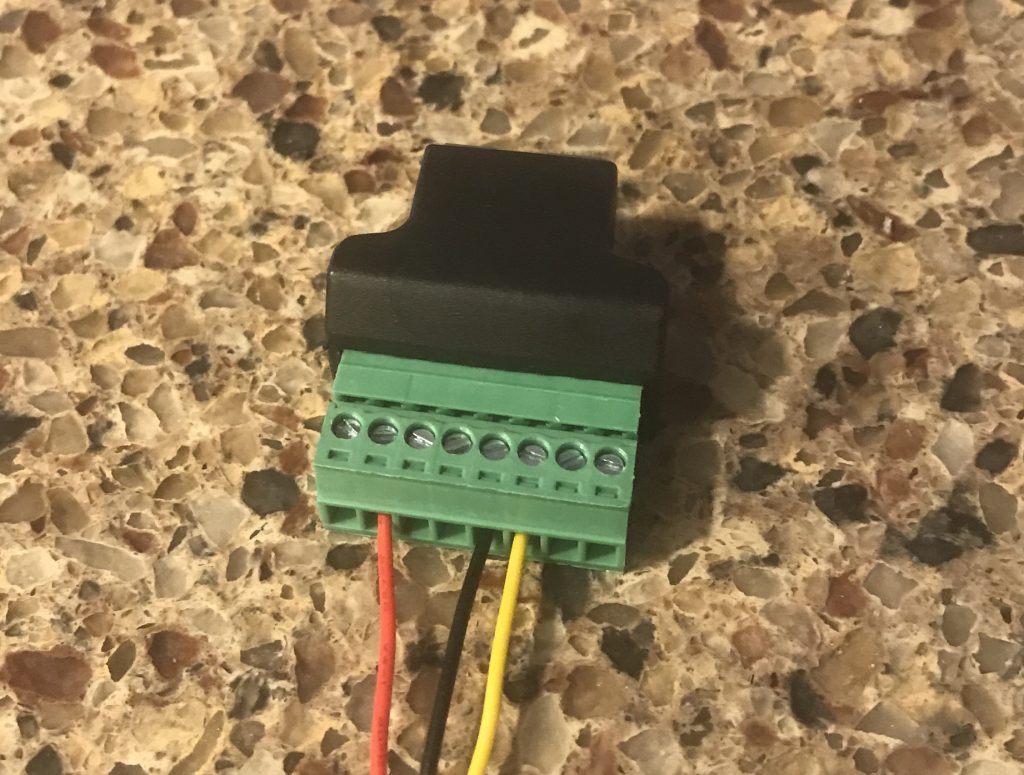 Once the thing is wired, you just follow the normal Brewskey install instructions.

If you run into any issues, feel free to contact us and ask questions.

When your batch turns out great, though (hopefully more often than not), you want to make sure your beer is enjoyed. If you were a full-scale brewery, you’d have all sorts of records and metrics helping you keep track of things. But you’re just you, and as capable as you are, sometimes you don’t keep as strict data as you should.

So, now you’re looking at your kegerator, packed with a cold keg of a Stone Ruination IPA clone, and you’re thinking, “Was it two or three weeks ago I tapped that thing? It was definitely before the party for Megan’s birthday, but how long before? How much beer did we even drink that night? Have we hit peak freshness, or can it last until Sam’s party that’s, let’s see . . . 10 days from now?”

You know what would be the worst? Running out of beer at Sam’s party. No, actually, serving stale beer would be worse. Much worse.

Now imagine you’ve got a Brewskey hooked up to your kegerator’s tap. You don’t even have to go to the basement to ponder that keg. You can be at work and just check your phone. There you see the tap date, what kind of beer is in there, how much was poured—and how much your friends drank at Megan’s birthday party.

Turns out it was a decent amount. The beer is probably fresh enough to last until Sam’s party, but it’s probably not enough to go all night. You know what? There’s a simple solution to this problem. You do some quick math, so many pints per person divided by the remaining pours, etc., then you message three friends:

Guys, you gotta help me drink this keg. Friday night. Let’s do it.

Okay, maybe you were a little dramatic about it, but you know your friends are selfless folks who would respond to a call for help. And now you’ve got plans for Friday night.

Watch this short video on how Brewskey works.

Brewskey is our attempt at creating a simple, easy to use product which connects to your kegerator to measure every pour.
The Brewskey box consists of the box, a valve, and a flow meter.  This allows you to keep your enemies from pouring your beer and allow your friends to see how much they poured at the end of the night.  Installation is easy just:

After setup, you can invite your friends to download the app.  The app features user profiles, badges, and history of your kegerator.  Want to know who drank the most beer from the last keg? We got you covered.  Brewskey also features a daily leader board.  This can keep everyone honest about how much beer they really drank.

Our first PCB finally finished testing and arrived on our doorstep.  We’ll spare you an unboxing video but needless to say we were excited for it to arrive.  Our electrical engineer did an awesome job constructing this and adding tweaks to the board to improve the NFC reader.

The board came with two antennas that have slightly different designs.  The engineer designed them himself and created them with his own 3D printer.  We’ll be testing them thoroughly when we hook this up to our kegerator

As you can see, our 3D printed brewskey box fit the PCB perfectly.  It fit but it was a challenge to get the board in there since it was pretty snug.  In future revisions of the Brewskey box we’ll add a bit more wiggle room.

The Brewskey box uses a 12v-24v plug for power.  It also has a USB port so we can do some debugging.  The ethernet port is used to hook up the flow sensor and solenoid.

We just got the version 2 of our PCBs in from the manufacturer. This board has support for the OLED screens to take advantage of our latest firmware updates. Hopefully this will be our final design.  Also, for all you out there that think this looks crazy complicated — we feel the same way 🙂

The latest update to Brewskey now allows you to see the volume of your pour on the OLED screen in real-time.  No longer do you need to watch the app to see the amount you poured — although you might want to check to see if you unlocked any badges